Volatility is the measure of how the price of a financial asset varies over a certain period of time. If the volatility of a financial instrument is high then it's value can change drastically within a small period of time in either direction. A highly volatile crypto asset is generally perceived as a high risk investment and and a less volatile coin as less risky. At the same time it is also true that high risk asset produces higher return. For investors volatility represents an important measure of how desirable it is to own a certain stock, based on the investor's appetite for risk and reward. A study by Alan Moreira and Tyler Muir (Yale School of Management) in 2016, showed that "Volatility Managed portfolios that take less risk when volatility is high produce large alphas, substantially increase factor Sharpe ratios, and produce large utility gains for mean variance investors." - which means low-volatility markets can also deliver better returns.

Why should I track volatility of a coin?

You should always track volatility before investing in a coin. No, not because we are telling you to do so, but because:

>> If you are a risk-taker your concentration should be on high volatility coins as they generally produce higher return with an increased risk element. On the contrary if you like to avoid taking risk and would like to concentrate on a steady return, you should always avoid highly volatile markets. We are the first tool that tracks volatility for you and sends you alerts when your selected coins become highly volatile. Volatility Managed Portfolios generally produce more steady returns than unmanaged ones.

>> You don't have to continuously keep an eye on 2000 different charts 24/7 to figure out which coins are going up or down or becoming highly volatile. We provide you with the ranking of more than 2000 coins based on their volatility. You can save hours and easily filter coins to focus on based on your risk and reward appetite, using our 1 hour and 24 hour volatility rankings.

>> You will be able to detect PUMP and DUMP events at a very early stage as we would send you the top 20 most volatile and least volatile coin rankings every 15 minutes. Never miss a PUMP and DUMP event again, no matter whether you want to avoid investing at that moment or want to make profit out of it!

Can tracking volatility let me know when the next Pump or Dump will happen?

NO, no tool can tell you when the next PUMP or DUMP of a certain coin will occur unless you are one of those who are causing the coin to PUMP or DUMP. But you will be able to know which coin is PUMPING or DUMPING at a very early stage if you track volatility of the coin, as in the event of PUMP or DUMP price fluctuates very rapidly resulting in an increased volatility.

I am a newbie trader. How will I get benefited?

If you consider yourself a newbie trader, you are always on a learning mode and might fail several times while understanding the trading charts. We are there to help you reduce your losses when you are beginning your trading career. We rank highly volatile coins and send volatility alerts in a very easy-to-comprehend manner. These tools will keep you away from investing in a high volatility coin and help track PUMP-DUMP events as you are most likely to incur a huge loss while trading under these scenarios if you are a beginner.

I am a pro trader. How will I get benefited?

If you consider yourself a pro-trader then you have opportunities galore. You will be able to track the most volatile markets 24/7 and you don't have to waste time studying charts to figure out which are the markets that will provide high return to you. Also, you will be able to track volatility of your long-term and mid-term portfolio coins in order to be able to pick the right time to sell and buy them.

Eveything in basic PLUS you will have exclusive access to the volatility ranking of more than 1000 top highly-traded coins for the current 1 hour and 24 hour period. The volatilities of these coins will get updated every 15 minutes. You will be able to track most and least volatile markets throughout the day through our web interface which in return will help you make wise investment decisions. You will also receive one email daily containing the list of most volatile coins of yesterday! 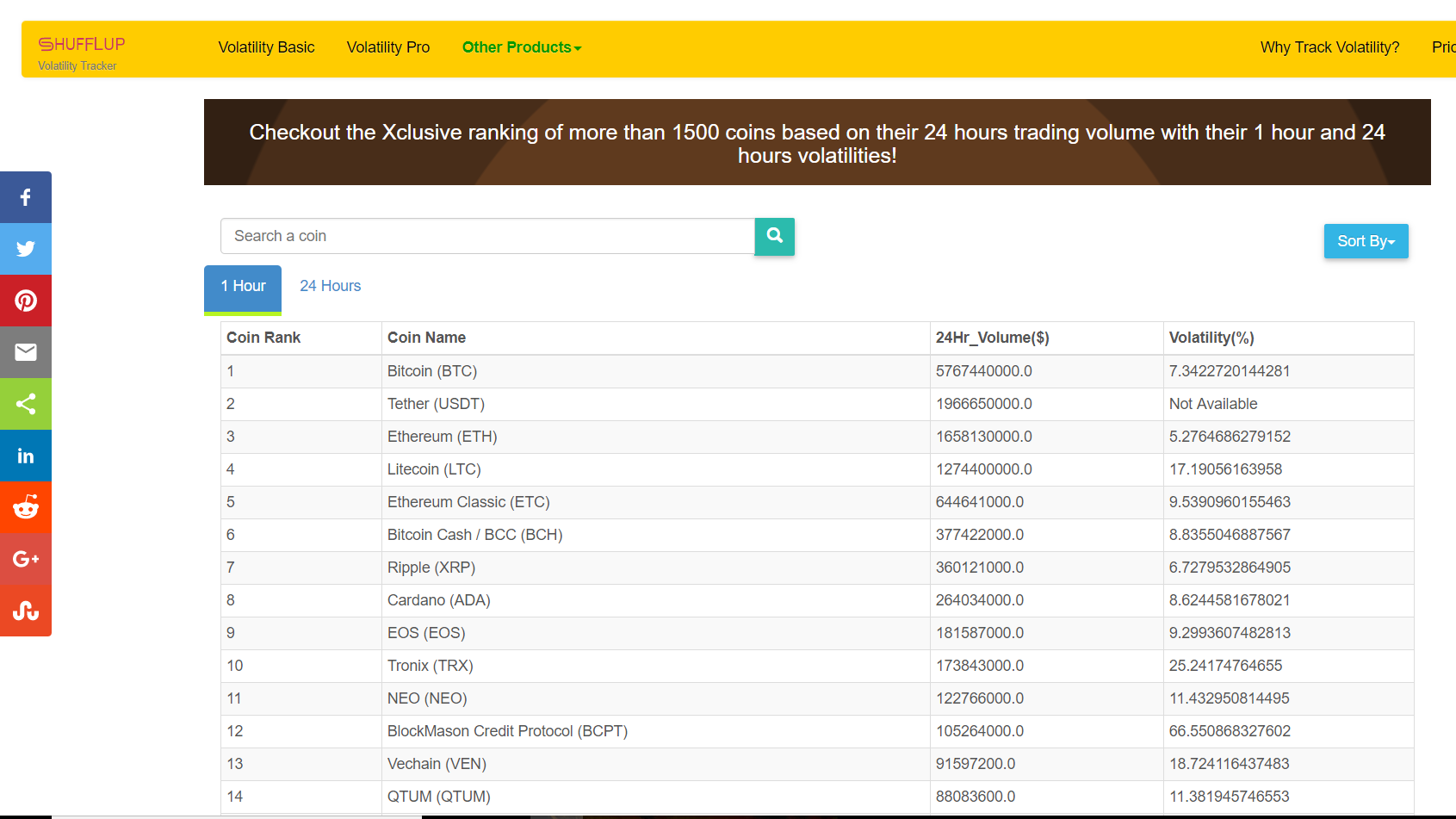 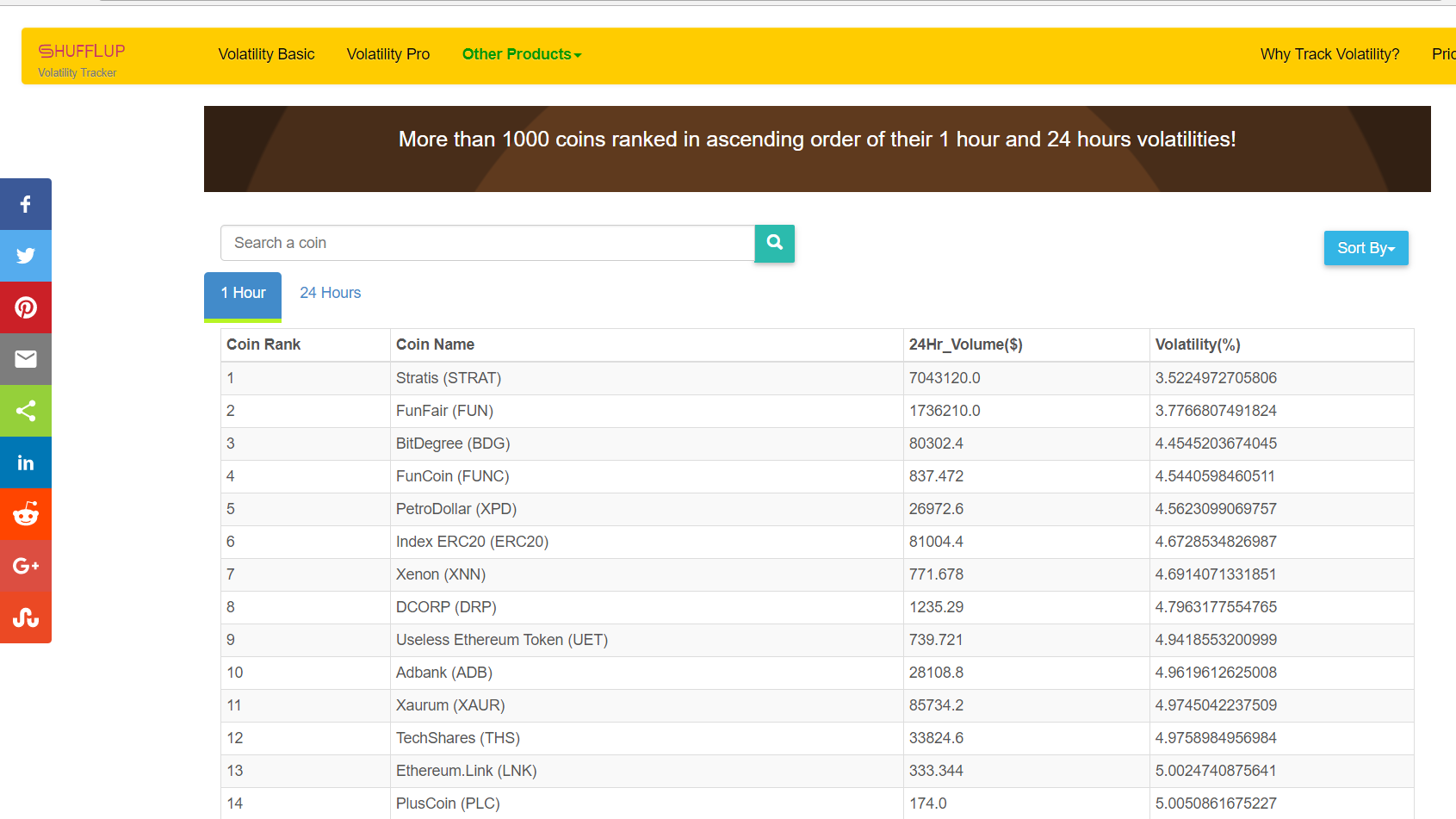 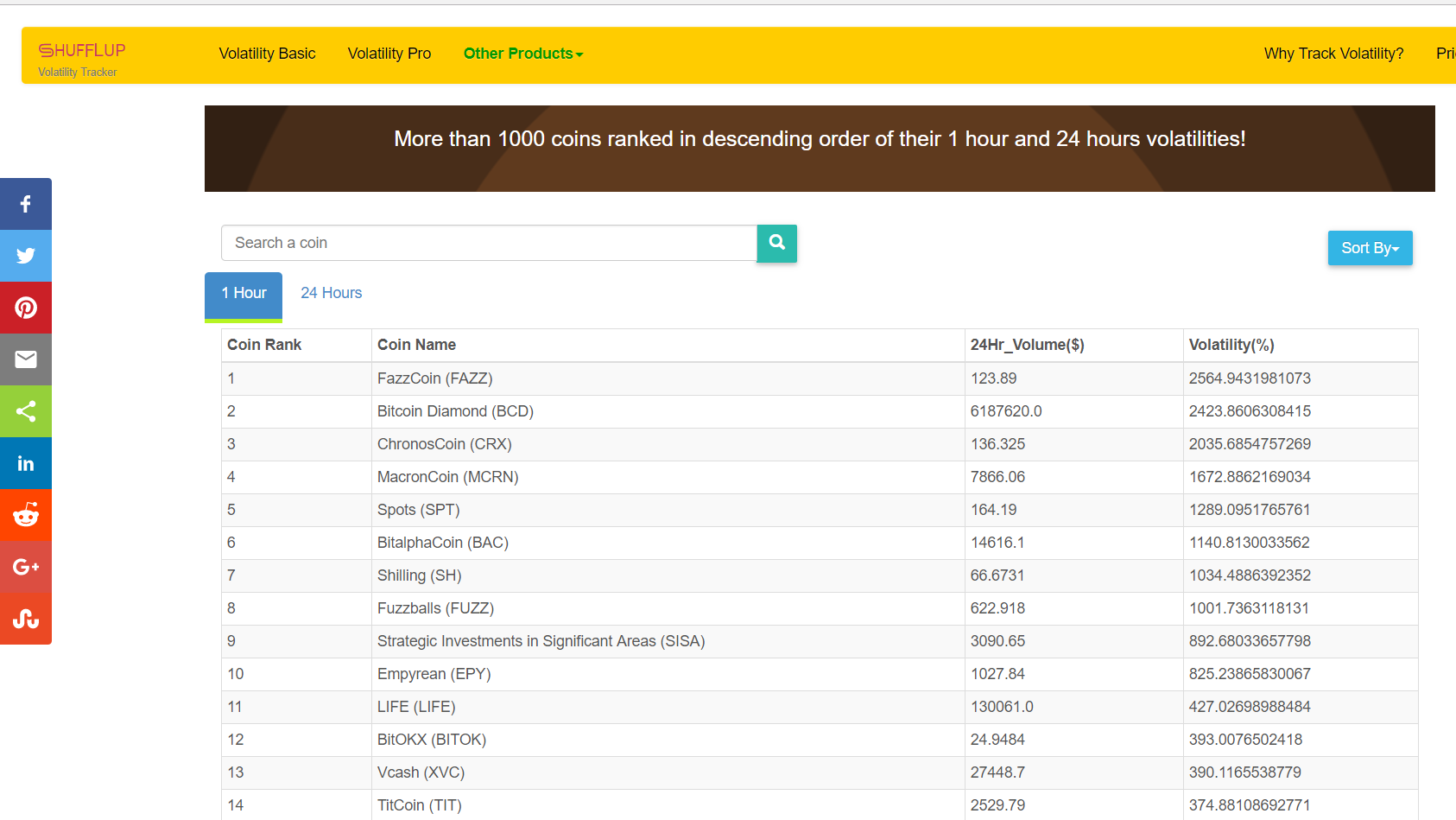 Everything in Standard PLUS you will receive email alerts every 15 minutes with 20 most and least volatile coins of the past 1 hour. 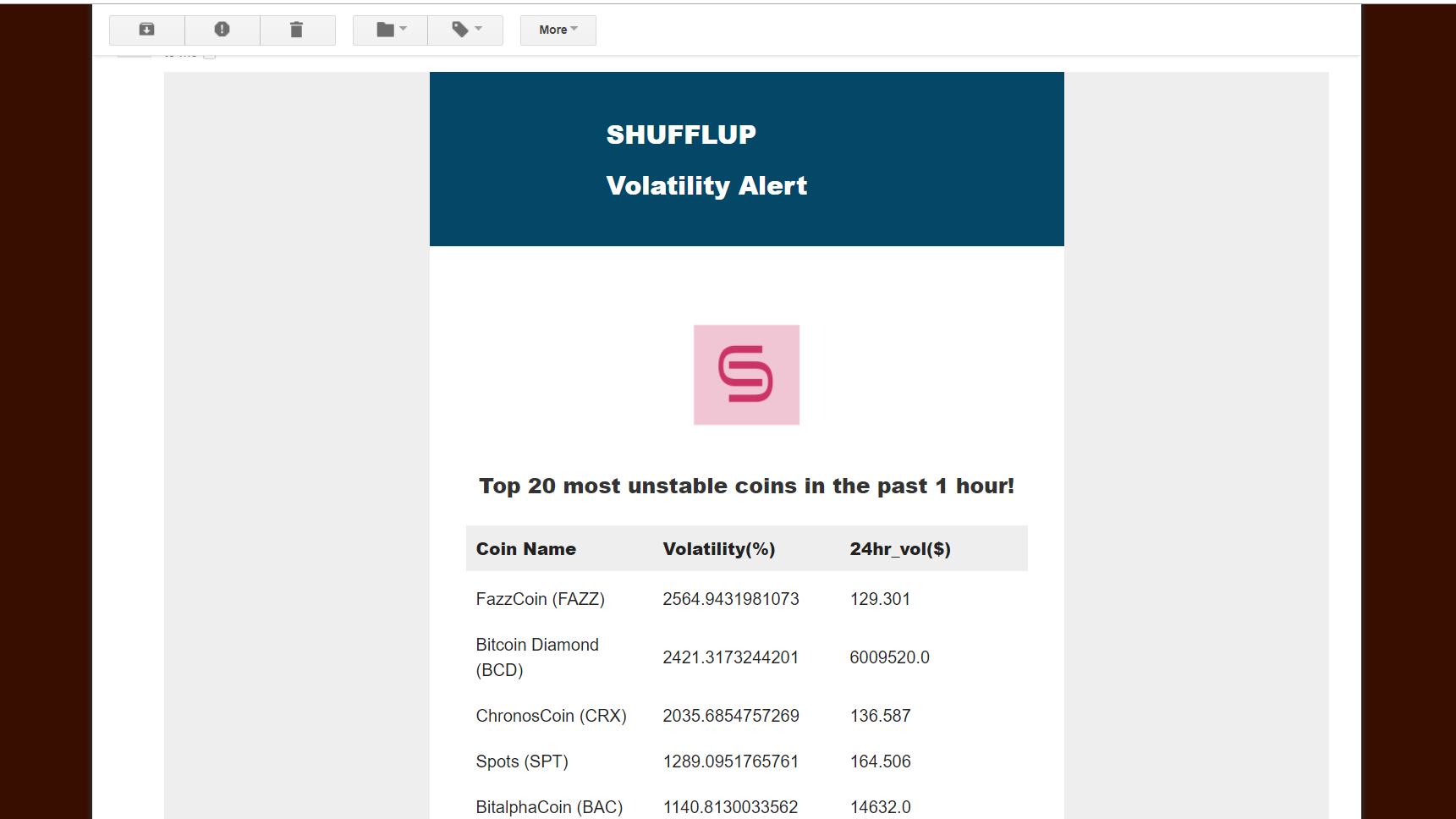 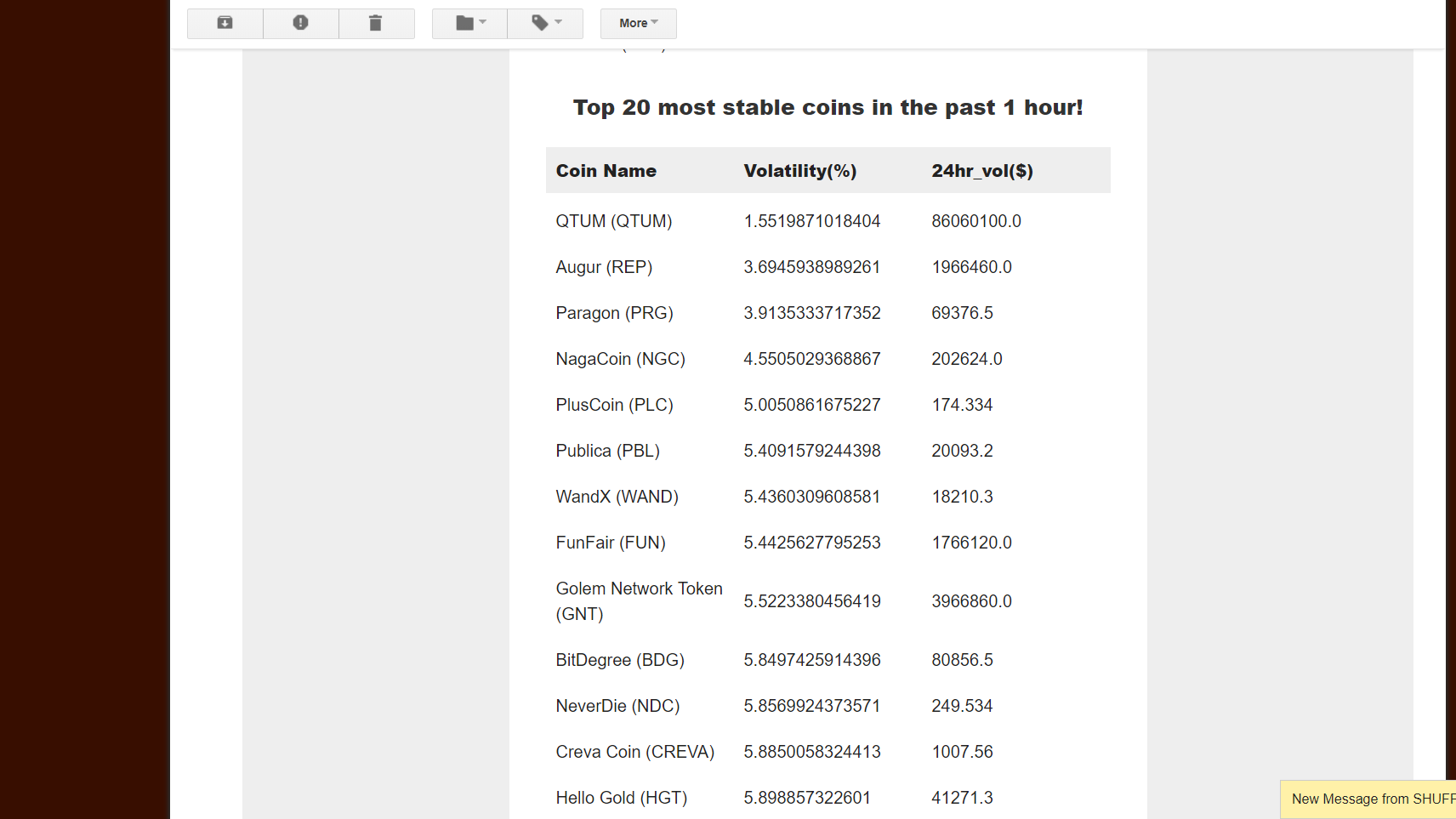 Track volatility of upto 5 coins of your choice!(Hit Account->Settings) Get notified whenever your selected favorite coin/coins become highly volatile! 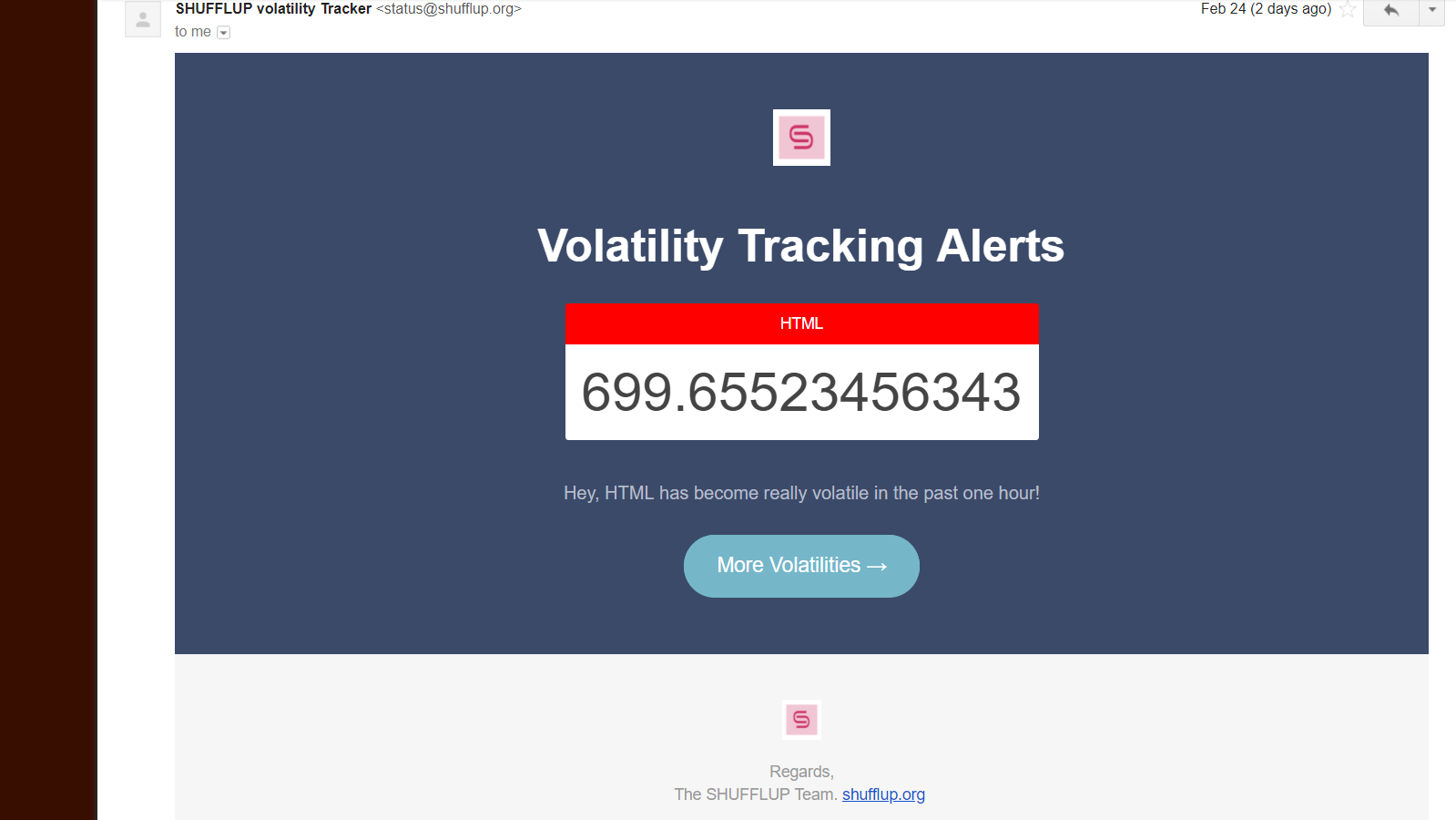 What is the source of your data?

All the historical data have been taken from CryptoCompare API. For 1 hour and 24 hours volatility computation, we have integrated more than 100 exchanges' API with our application.

Have more questions? Just shoot us an email at support@shufflup.org. We will get in touch with you as soon as possible.